This is an awkward situation. On the one hand variation in climate can result in local loss of species and even extinctions and yet without variation there is less diversity. It is a balance that we have yet to fully understand.

Over the millennia climate change has created natural disturbance that is an important driver of evolution. Without alterations to the standard sequence there would be far less variety of life to conserve.

When the normal run of weather and seasons are disturbed some organisms cannot cope and die out. Gaps are created that other species exploit. Sometimes this exploitation requires some new adaptations and where these stick over generations, new species can emerge.

Here is an example. 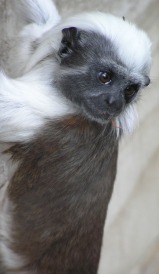 There are 25 species and 34 subspecies of forest guenons (a group of primates belonging to the genus Cercopithecus) in the rainforests of West Africa.

The current hypothesis to explain this extraordinary biodiversity is cyclical climate change.

The idea is that during cool times the rainforest was reduced to isolated fragments that allowed allopatric speciation - this is evolution as a result of geographic isolation and a common way that new species arise.

Then when the climate warmed again, the forest spread out to cover large tracts of Africa and the guenons spread out with it. Only after generations of isolation they could no longer interbreed and stayed as separate species.

Eventually the more successful species may outcompete the others but for a time there are many different species sharing the same forest.

It is a little different with abrupt climate change. .

Rapid changes to rainfall and temperature and to the frequency and intensity of extremes mean that habitats are altered, comfort zones shift and extreme events put pressure on species.

As human numbers and affluence grow we use up more of the world resources and places.

Each hour of each and every day there are roughly 9,000 more people added to the global population. And each year economic activity expands.

Indeed when it doesn't we panic and exclaim "crisis!"

More people with growing affluence, has made finding space for biodiversity, wilderness and the renewal of natural resources harder and harder.

Imagine all the human effort and sacrifice that goes into creation of a nature reserve only for the temperature and rainfall conditions to change and make the area unsuitable for the species the reserve was set to protect.

What to do about conservation climate change?

So far the focus for preservation and protection effort has been on preventing losses and trying to reduce threats to future loss from climate change, especially in vulnerable habitats.

A good example is alpine systems that will shrink in size as conditions warm up.

Some of the practical conservation actions include:

Much of this was already part of responses that reduce the impacts of global changes (the consequences of large numbers of people seeking economic returns) that has been part of the international development speak for a generation.

And there are many good examples of it being effective - David Suzuki and Holly Dressel describe several in their excellent book Good news for a change.

The task for conservation climate change will be to take more and more of these actions.

Conservation climate change is an opportunity

It may seem odd but if we accept that climate change will happen and that it will be severe in some parts, both in intensity and speed, then to have climate change adaptation we must think a little differently.

We will need to think

Do these things around conservation climate change and conservation becomes an embedded outcome, a key deliverable from improved management of the environment.

The kind of funds that will be spent on climate change mitigation (greenhouse gas emission reductions ), abatement (avoided emissions), biosequestration, and adaptation are huge. Already there are commitments for adaption funds in the billions of dollars.

Much of this money will help to preserve forests and improve agricultural practices.

Anthropogenic climate change will bring new challenges to natural habitats and the species that live in them and to the production landscapes that we rely on for our well-being.

Climate change will make traditional conservation harder but it also offers a huge opportunity for good.