Serious biodiversity loss is happening — and it is the oceans that might show the effects first.

In 1995 environmentalist Richard Leakey wrote a book called The Sixth Extinction. This accessible paperback described what many others had been saying and writing about in the scientific literature.

It was this — the current phase of human activity on earth is causing the next mass extinction event, the sixth in 450 million years.

Mass extinctions are events big enough to see significant loss of species, families, even whole lineages of organisms from the land or the oceans. And the most recent was at the end of the Cretaceous 65 million years ago when 75% of species were lost.

Extinction must also have occurred in the 3.8 billion years of microscopic life that went on before plants and vertebrate animals but the mostly small, soft bodied organisms left little evidence behind.

The big extinctions we know about were a little like levelling the playing field by clearing it for a new crop of players, with evolution and chance determining who gets picked to play.

In April 2011 scientists and world experts on oceans met at Oxford University in the UK to review information on the biological state of the world's oceans.

After sifting the evidence of impacts and considering their consequences the experts agreed that...

And their general conclusion was...

...not only are we already experiencing severe declines in many species to the point of commercial extinction in some cases, and an unparalleled rate of regional extinctions of habitat types (eg mangroves and seagrass meadows), but we now face losing marine species and entire marine ecosystems, such as coral reefs, within a single generation.

Unless action is taken now, the consequences of our activities are at a high risk of causing, through the combined effects of climate change, overexploitation, pollution and habitat loss, the next globally significant extinction event in the ocean. It is notable that the occurrence of multiple high intensity stressors has been a prerequisite for all the five global extinction events of the past 600 million years (Barnosky et al., 2009)

The experts on the oceans are describing the details of the mass extinction event that Leaky wrote about.

What is striking is the similarity with the past mass extinction events.

Significant biodiversity loss in the past happened because there was a major change in global conditions. These were disturbances big enough and widespread enough to impact all the populations of a species sufficient for them to die out. That means they either were killed directly, ran out of food, water or shelter, or were unable to reproduce.

The kind of events big enough to do this were

Remember that most of the earth is actually molten, held together by gravity and a thin crust. Hit a bounded liquid hard and it wobbles for a long time.

Volcanic activity witnessed by any dinosaurs who survived the initial strike would have been spectacular.

Dinosaurs notwithstanding, past extinction events were most significant in the oceans. So this warning from the Oxford meeting is important.

It tells us that the modifications we have made to the environment both locally from clearing land, polluting rivers and fishing out populations of fish; and globally from changing the atmospheric composition; are enough for extinction rates to qualify as a mass extinction.

This is biodiversity loss in a geological instant.

It is as though the earth had been hit by a big chunk of space rock.

And even more biodiversity loss seems inevitable because...

The mass extinction event is here and now. 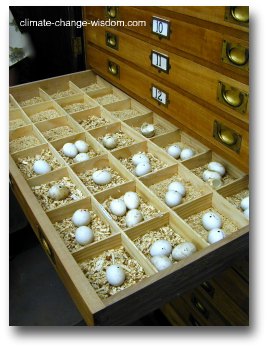 There have been wins.

A handful of pioneer conservationists at the start of the industrial revolution laid the foundations and serious effort was ignited in the 1960's that has led to most countries having some form of protection of wilderness and iconic species.

This effort has focused on the land, for that is where we live.

At best these actions will save some of those icons and keep a few wild places. Yet this is critically important for these will be islands, or perhaps arks, to provide the raw material for evolution after the biodiversity loss.

A little like the stock market, even with crashes from extinction events biodiversity keeps growing over geological time. This is what happens. Evolution and time will see a return to a diverse flora and fauna, only it will take all our ingenuity to survive long enough to see it.

For a sobering review of our collective failure to prevent biodiversity decline, despite all the conservation effort, see this review in the journal Science by Buchard et al 2010 Global biodiversity: Indicators of recent declines