What causes climate change is an obvious question for us once we admit that climate changes. We are, after all, a hugely inquisitive species always eager to figure things out and solve problems.

Energy received and stored in the thin skin of the planet is in flux.

Energy arrives from the sun with varying intensity and either bounces off to be radiated back to space or is absorbed by the green and blue mantle. And the gases that make up the atmosphere hold some of the energy back.

In short, climate change is the consequence of a fluctuating energy budget.

Then there are proximate causes. These are the factors that affect how much energy is received, absorbed, radiated back and trapped and they are the:

Three of these proximate causes are themselves affected by human activity.

When did we first suspect there were causes of climate change?

Historical evidence tells us that the Greeks were thinking about what causes climate change in the third century BC - we might say ‘the Greeks’, but it was probably just a small number of intellectuals and they were thinking locally.

According to Theophrastus, a student of Aristotle and a smart fellow who probably spent a fair amount of time wandering around the hills and valleys, draining of marshes cooled the climate and felling of trees made it warmer.

If you spend enough time wandering around outside, especially at dusk, you’ll feel that cold air sinks. In the morning you’ll notice it gets warmer faster out in the open compared to under a shady tree. It is possible to feel these kinds of change to temperature and moisture.

The big leap for Theophrastus was to surmise that removing the trees or draining the heat sink of a water body was enough to change the weather consistently. It was enough to be a cause and at least a part answer to what causes climate change.

The deforestation idea resurfaced periodically, notably in the 17th century when observant individuals were confident enough to claim that clearing forests definitely made it warmer in both Europe and North America.

During the mid-1800’s, about the time that Charles Darwin was discovering the idea of evolution through natural selection, geologists established that in times past glaciers were far more extensive. What these scientific innovators were describing was the idea of ice ages.

It is hard for us to imagine now how radical this idea would have been back in the 1800's.

To get ice ages, or evolution for that matter, there must be a lot of time. In fact much more time was needed than we can readily imagine. And certainly more time than people were prepared to believe had elapsed since the earth was created. If ice ages had occurred the earth needed to be very, very old. The paradigm of the day was that the earth was created only a few thousand years before the present.

Indeed, for 2000 years of western culture the predominant thinking was that the earth was fixed in time and space - made that way by God. It took a rare individual to contemplate time and change. Even if you are not religious the concept of stability, a fixed and predictable environment, is likely to sits more comfortably than radical change.

Our natural perception is for now, today and where our next meal (or maybe our next job) will come from; and our memory is for big, traumatic events in the past and not much about the everyday.

At a push we can imagine that draining a marsh has a cooling effect. It is something else to imagine a change big enough to cause an ice age across half the globe.

But these innovators did it. They managed to stretch their imagination to time periods beyond our normal ken. In a way they broke the mould of thinking the world was fixed.

Soon there were many such ideas being talked up and written down. Sources of evidence of climate change emerged from the new scientific disciplines of geology (the study of rocks) and geomorphology (the study of landforms). Later scientists added more modern methods, such as ice core and surface temperature records, so that now we are convinced that climate does in fact change over time.

Climate change is a real physical phenomenon because, given enough time, weather patterns change. Through the 1900's and through to the present the evidence for climate change began to pile up.

The ultimate cause was logical. There were shifts in the energy balance of the atmosphere and oceans.

It is the proximate causes that required some clever thinking, especially early on when the paradigm was for stasis, that the Earth was a stable, unchanging and massive object.

The ideas that emerged roughly fit the following:

One of these ideas has us captivated today; but they all have legitimacy in logic, and scientific evidence to support them.

In the end what causes climate change is a fundamental premise and time.

The fundamental premise of what causes climate change

The premise is that the earth is a dynamic object made up of dynamic particles all buzzing around, resonating and changing.

There is no fixed earth, no fixed land, rivers or oceans, no fixed biota and no fixed atmosphere. The whole place is moving, in flux.

The only constant is change.

Now if you accept that things change and you add time... then what you get it is clear.

It may not be necessary to know what causes climate change only to accept that it does.

The value of knowing what causes climate change is that the rate, extent and intensity of climate change can be predicted. This is very valuable knowledge as it helps us decide what to do to achieve climate change adaptation and where and when we need to do it.

Instead we seem to have latched onto the one cause of climate change that we believe we can control, CO2 emissions.

And we have put all our energies into actions to reduce or prevent these emissions. Perhaps in an attempt to halt or even reverse the change.

If they were alive today those pioneers who faced the reticence of the day against the concept of change, might say nothing has changed. 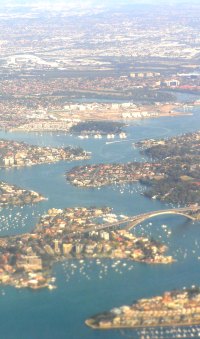