Carbon cycles are what make for the vibrant renewal of life on earth. It is the process that keeps us all alive — air to breathe, food to eat and clean water to drink.

Carbon plus energy from the sun are the fundamentals for life on earth. How carbon moves between the atmosphere and oceans and on land among the plants, animals and microbes is the unique combination of physics and biology; elegant in its simplicity of principle and fascinating in its complexity in nature.

Here is this cycle of carbon from the view of a carbon atom innocently attached to two oxygen atoms as a molecule of carbon dioxide in the atmosphere:

At any point in this sequence of carbon cycle events the carbon atom could escape back to the atmosphere as carbon dioxide.

Instead the atom we are following transfers among the bacteria and is eventually consumed by a mosquito larvae and incorporated into the tissue.

In time the larvae emerges as an adult that is eaten by a flycatcher that defecates it in a batch of uric acid to the soil where a whole new set of decomposer organisms get to work.

Through these cycles within cycles, the carbon atom stays out of the atmosphere, moving among the myriad of organisms that make up the biosphere.

It might do this for hundreds of years before returning to where the sequence began as a carbon dioxide molecule.

The carbon atom might equally become fixed into carbon compounds in soil and stay there for thousands of years or become sediment and stay buried for eons.

Carbon atoms in carbon dioxide molecules also enter the oceans to be used by countless billions of microscopic diatoms, plankton and shellfish. Some of this carbon sinks to the sediment eventually to form carbonate rocks.

It is tempting to call this a sink, carbon stored away for millennia, although even this carbon can return to the atmosphere through uplift and erosion or consumption at plate margins and volcanic release.

The conventional wisdom is that anthropogenic climate change is a consequence of the disruption to these carbon cycles in two main ways:

Some 15% of global greenhouse gas emissions are from land clearing for agriculture and urban development. When land is cleared decomposition or burning releases much of the carbon stored in vegetation and soil. And without the leaves there are no stomata to take in that atom of carbon in the carbon dioxide molecule.

Some carbon is sequestered in the crops that replace the trees but this carbon is cycled much more quickly than the natural vegetation — much of it through us and out into the oceans via the sewage system.

The release of long-term carbon to the atmosphere from the burning of oil, natural gas is part of a much longer carbon cycle. The short term effect is to increase the flux to the atmosphere. And, although the atmosphere has held larger volumes of carbon dioxide in the geological past, atmospheric models predict that this increase in CO2 has and will result in global warming.

There is another effect of disruption to the cycles of carbon.

Regulation is less efficient when the natural system is disturbed. Clearing forest and vegetation for crops and grazing land reduces biodiversity and changes the heat and moisture balance.

Soils lose carbon because they are exposed and end up drier and friable. When rain falls it washes away rather than soaking in. The cycle breaks down further.

Much of nature's capacity to buffer against the weather, seasons and disturbance is lost. The organisms that are left are less able to absorb extremes and store resources for leaner times.

This is a huge consequence of disrupting carbon cycles and one we are likely to regret far more than a few degrees of warming and extreme weather. 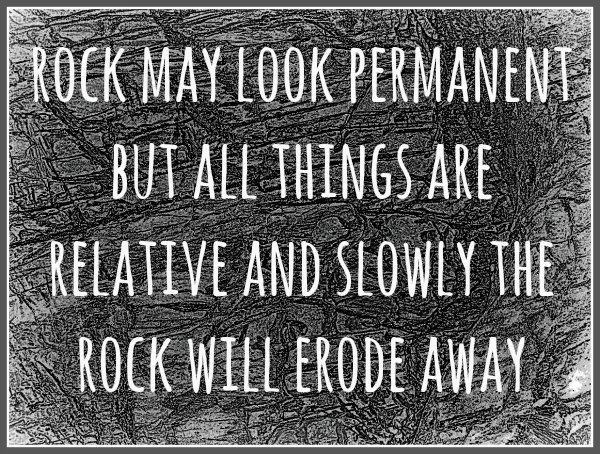 Confused Confucius spurned the monastic life for the world of work, moral conundrums and mobile devices. His sayings, questions and incongruous idioms on the environment and modern life bring delight and bafflement in equal measure...  check out more Confused Confucius sayings.