The carbon pollution reduction scheme, or CPRS, is [or was], the original Australian version of a cap-and-trade-system to reduce greenhouse gas emissions.

It is an interesting choice of name for three reasons:

It is as though if we name it something active and [dare we say] socialist, people will not realize that it is actually a market mechanism invented to work in the capitalist system.

For the moment none of this matters for the CPRS was shelved.

Despite a long gestation, major reports, two attempts at passing through the parliamentary process, and, arguably, the loss of a Prime Minister the scheme has been officially put on hold.

In 2009, then Prime Minister Kevin Rudd gave a speech in which he called climate change "the greatest moral challenge of our times". He was, like the majority of voters at the time, a believer in the need for a solution to climate change. His first significant action when he came into office was to fly to Bali and sign the Kyoto protocol.

The advice he had received from the independent Garnaut Report on climate change said that climate change was real and needed to be fixed. Not only that but reduction in greenhouse gas emissions was the way to formulate policy.

Economists in the government departments also suggested that a cap and trade scheme was the most cost effective way for government to meet emissions targets. 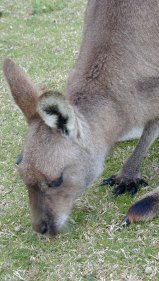 What the prime minister must also have been told is that emission reduction for Australia is a big challenge.

The economy runs on mineral exports and society is powered by fossil fuels. For generations cheap energy has come from coal fired power stations, some of them burning especially dirty brown coal.

The per capita greenhouse gas emissions of Australians is up there near the very top of the global list.

The 2007 World Bank estimates [based just on emissions from fossil fuel use and cement manufacture] were 17.7 tCO2e per person for Australia and 19.3 tCO2e for the US, both more than 3.5x the global average of 4.7 tCO2e per person.

Getting better but still out there.

The scenario modeling in the independent and government reports shows that actual emissions will continue to rise in Australia for the next 30 years. Even with incentives to reduce energy consumption and penalities on emitters, economic growth would still result in a net increase in GHG emissions.

There would still be an increase in the activities that produce greenhouse gas.

The only way to achieve even modest net reduction targets is to purchase offset credits.

Some credits could be generated from local projects [and in 2011 a domestic offsets scheme called the Carbon farming Initiative was established] but the bulk would have to be purchased either on markets or, more likely, in bilateral deals with developing countries where avoided deforestation can generate significant volumes of emission reduction.

This requirement to purchase credit is why the really big emitters, especially the US and China who together account for 40% of global greenhouse gas emissions, do not want commitments to reductions pegged at 1990 levels. The level of emission reduction is too high to achieve without crippling their economies and they choose not to afford the alternative which is to purchase credits.

So the cap and trade approach that is supposed to work in the market fails when countries can choose to opt out.

A few weeks later he was ousted in favour of Julia Gillard. The new Prime Minister went into an election without a CPRS or any credible climate policy and squeaked home in a hung parliament.

A much simpler precursor to a full CPRS, the Carbon Farming Initiative was introduced. The CFI is a national programme to generate some offset credits mostly from the waste, agriculture and land management sectors, ideally at prices that emitters can stomach. It focuses on the supply side and it remains to be seen what the policy will do to slow demand.

It has proven very hard to introduce emission reduction policy and so achieve a les emission intensive economy. This was always going to be a challenge for Australia as it relies so heavily on coal fired power and the export of minerals.

The environmental movement in Australia was also against a trading scheme claiming that it did not do enough. In parliament the Green party helped defeat the original configuration of the scheme [see this alloporus blog post that asks Can you be too green?].

It seems that everyone is confused enough to hesitate when it comes to climate policy. This comes across as a lack of conviction that then erodes public confidence.

Now were are stick with inaction. The solution seems to be: wait long enough the problem will go away on its own.

Such is the style of modern leadership.

Find out more on carbon trading on these climate change wisdom pages...