In 2011 the people of Queensland, Australia experienced catastrophic floods.

The terrible distress, loss of life, and property damage has only been tempered by the heroism and generosity of the human spirit.

The water covered vast areas of what is a large state. More than 60% of the human population was in some way affected.

Inundation of this magnitude does not happen very often. If it did then the areas subject to inundation would be uninhabitable. People would not have built houses, towns and cities in these places. It would not make any sense.

The catasrophe for Brisbane was a one in 100 year event. It was of a size infrequent in human memory. Consequently such extremes do not feature as significant on our planning horizons.

None of the houses in Brisbane that were inundated up to the rafters existed 200 years ago.

However, go back in time and the situation is very different.

Since the first aboriginal peoples arrived in Australia some 50,000 years ago the Brisbane River, the source of the floodwaters, will have overflowed at or more severely than the January 2011 event roughly 500 times.

No-one is alive who remembers 497 of these events.

Aboriginal oral history perhaps recalls some of those in the past but even this history cannot place 450 of them.

The proximate cause of the January 2011 floods was heavy rainfall over central Queensland, itself a result of an energy balance pattern in the oceans known as La Nina. Cooler than average water in the central and eastern tropical Pacific Ocean results in increased convection over tropical Australia, Papua New Guinea and Indonesia. It is a logical scientific explanation.

Naturally it is easy to conclude that this is a result of global warming even though logic tells us that such events are bound to happen with or without warming. They are just a feature of the severe weather that occurs in the tropics.

Is it global warming?

We leap to the conclusion that heavier than average rain is climate change in action and maybe it is.

Only a strong La Nina is the cool phase of the El-Nino Southern Oscillation and wet periods over eastern Australia are the norm during this part of the cycle.

Suppose that the frequency of extreme events has increased. Let's say it alters the probability by one half. This means that flood events above 14m in downtown Brisbane now have a one in 50 year chance of occurrence.

This does not mean, of course, that there will be an event in 50 years time. It could happen at any time, tomorrow even. It just means that likelihood of such a large event has increased. It also means that such events will become more frequent.

This shift to one in 50 years might be short enough to change some planning rules, but not enough to relocate a city of 2 million people.

Although wholesale movements of such a scale have been done before, such as when China decided to create dams on major rivers, it is a huge task.

Here is a similar example.

At some point in the future the San Andreas fault will slip. Why? Because the Pacific plate is still colliding with and pushing hard against the North American plate and the fault is the release valve for this build up of pressure. It may slip tomorrow or in 1,000 years time.

All we know is that the last time it moved significantly there was nobody around to record the consequences.

All this means is that there are some things in nature we simply have to accept.

They will happen again.

We can blame climate change if we wish, but even without it there would still be floods in Queensland.

The smart play is to accept what is real and plan accordingly. 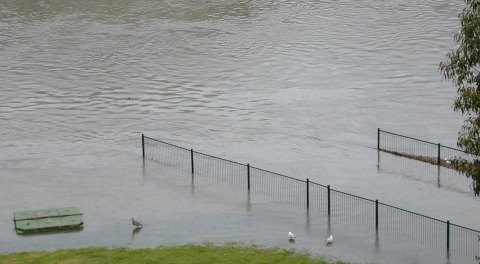