Carbon dioxide, CO2, is the greenhouse gas with the most press.

It is released when anything high in carbon is burnt – trees, grass, coal, oil and natural gas all release carbon dioxide on combustion.

It is also released from natural processes such as when

In fact 20 times more carbon dioxide is released naturally than from human activity.

But all that burning of fossil fuel, roughly 60% of the anthropogenic greenhouse gas emissions, is the thing that gets into the newspapers.

It is easy to forget that deforestation is almost as important and accounts for a third of anthropogenic emissions.

Why we are worried?

The current concentration of carbon dioxide in the atmosphere is around 384 ppmv (parts per million by volume).

Sounds like it has really increased - around 100 ppmv since 1750 – but push the timeframe out a few hundred thousand years and CO2 concentrations show regular fluctuations. 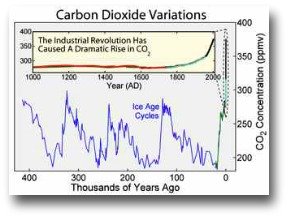 Atmospheric concentration of 384 ppmv is 60% higher than the average over the last 400,000 years. Big change, surely?

Well yes and no.

Go back in time a little further, 100 million years to the Mezosoic era where flowering plants (Angiosperms) had just evolved and prompted a spurt of evolution among animals dispersing pollen; a time when dinosaurs were in their heyday.

In the Mezosoic atmospheric carbon dioxide concentration was around 1,000 ppmv – two and a half times today’s level.

Go back even further into the earth’s history to the Palaeozoic era, 400 million years ago at the time when the first primitive plants appear on the land, and the concentration was around 3,000 ppmv – eight times today’s level.

Go back even further into the earth’s history to the Palaeozoic era, 400 million years ago at the time when the first primitive plants appear on the land, and the concentration was around 3,000 ppmv – eight times today’s level.

Makes sense as back then, when there were few plants to suck up the CO2, concentrations were going to be much higher.

In fact throughout most of the earths 4,500 million year history concentrations have been much higher than today. 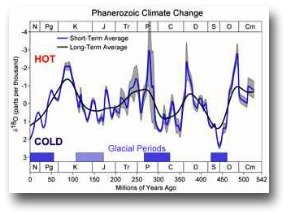 Given this evidence it is tempting not to worry about a 100 ppmv increase since 1750, it is only 3% of the amount in the skies of the Palaeozoic.

The problem is that carbon dioxide absorbs infra-red radiation, the long wavelengths of energy that bounce off the earth’s surface, delivering the greenhouse effect. It is not as effective as other gases, such as methane, but it is the most abundant of them.

Without it we would freeze, too much of it and we cook.

Change the atmospheric concentration quickly and the extra heat hits the global circulation systems in the atmosphere and the oceans – what we do not yet know is the relative force of the hit... or the consequence(s).

What we do know

What we do know is that higher concentrations of greenhouse gases will retain more radiant energy and result in global warming .

We know that these effects are more acute because there are very many of us and that over time we have altered the planet and the ability of the natural system to buffer us against the global warming effects .

And we know that even small changes in the basic elements of the biophysical system can be profound.

We should take care.