Alternative fuels have been sought after for generations, perhaps even before we learnt to harness fire.

is a highly prized asset and a valuable commodity.

Firewood was the fuel that did this for millenia. True, it wasn't always safe and it took some carrying around but those in possession of it had a huge advantage.

Some anthropologists suggest that by harnessing fire for cooking and so relasing more calories from food allowed for the evolution of larger more energy intensive brains in early hominids. And we have lived with the energy source of firewood and charcoal ever since.

Once we learnt how to substitute coal, then later oil and gas, for firewood humans rapidly became the dominant force on the planet.

Energy, especially the modern incarnation as electricity, is critical to human economies and society. So vital is energy that if you were lucky enough to find or invent a new safe, ubiquitous energy that is cheaper than the current sources; you would be very rich and famous overnight.

Alternative fuels have a tighter definition when it comes to climate change. They are energy sources with lower greenhouse gas emissions [per kilowatt of energy generated] than the fossil fuels we currently use to power the bulk of our transport and energy systems.

The main alternatives to fossil fuels come from nature

Geothermal and tidal energy are cosmic in origin, gravity gives us hydro-electricity, whilst solar, wave and wind come from the sun's energy.

Nuclear fission and fusion power are also alternatives to fossil fuels as are fuels cells that release energy form breaking chemical bonds, but these sources have their own issues with safety.

More on fuel cells on Wikipedia

solar panels on a dwelling in the Austrian alps

The US Energy Information Administration provides estimates of world consumption of primary energy.

In other words, less than 1% of the global power use came from alternatives.

Most projections do not see this changing dramatically over the next 20 years. The reality is that we have a heavy financial, political and emotional investment in oil, coal and gas — the big end of town has invested heavily in this infrastructure.

If the fuel is coal, oil or gas there is undeniable efficiency in large centralized power stations with the energy delivered via the power lines.

We are not so familiar with distributed systems where the energy is generated closer to where it is used. It is not the model we invested in.

Until the centralized system has returned on investment and run its course, it is not something we seem willing to change. Yet most alternatives do not scale up to the mega-size power plants but work well in smaller, more numerous facilities. 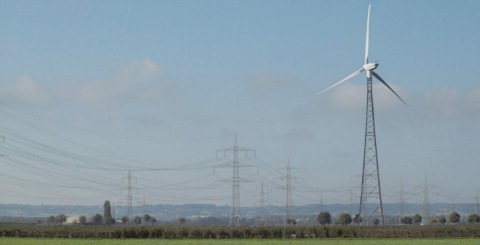 The political challenge for alternatives

One scary thing to a politician is when the power goes out.

It means disgruntled voters unable to boil a kettle, but critically it shuts down the factory that makes the kettle.

Industrial scale production to a distribution grid has seemed like the best risk management for governments wanting to keep the economy running. And centralised power production makes us, the consumer, believe that it is a government responsibility to provide reliable electricity. Any power outage or price hike and we send the blame to them.

Except that health, education, transport, and national security are the big-ticket items handled through taxes. These days utilities are mostly private enterprises even though their scale is such that they are often supported by government.

So far, alternative fuels, other than nuclear and localized hydro-electric plants, are not operating at this scale.

A large solar array might have a 60 MW capacity with the challenge of what to do for power at night. Compare this with an average coal-fired power plant in the US that produces 600 MW 24/7.

In Australia, where it sunny more often than not, in 2007 just 2.5% of electricity delivered was from renewable sources. Projections are that this percentage will still be less than 30% by 2050 even with a Government commitment to emission reduction .

It is as though we recognize the need to change, but embracing the economic and political realities has been a big challenge.

The problem is that alternative fuels are currently more expensive that the incumbent fossil fuels. Utilities sell green power at a premium because it currently costs them more to source. Whilst some people will buy green power because they want to 'do the right thing' for most price conscious households it is tough ask to pay more for exactly the same product, delivered along the same power lines, that provides exactly the same benefit.

Closing this price gap was the job of carbon trading by putting a price on carbon. If it was not possible to get economies of scale from wind, solar and other alternatives, then by pricing emissions energy from coal, oil and gas became more expensive.

We all need power.

Our modern world would collapse without electricity and everyone prefers it delivered at a modest unit cost. If we are going to achieve even modest greenhouse gas emission targets we also need electricity generation and heating fuel to be clean.

The trouble is that the alternative fuels are currently more expensive to deliver at scale using the existing grid system.

This is a tricky problem.

We have tried to fix it by pricing emissions to help make alternatives competitive. Some modest success in Europe and China aside, much of the world still relies heavily on fossil fuels for electricity generation and transport.

And this is the real conundrum. The reliance on fossil fuels is precarious not just because these fuels are dirty [toxic smog still clogs many cities around the world] and potentially driving significant climate change; but because they will run out.